Whats the Difference Between Whisky, Scotch, and Bourbon? 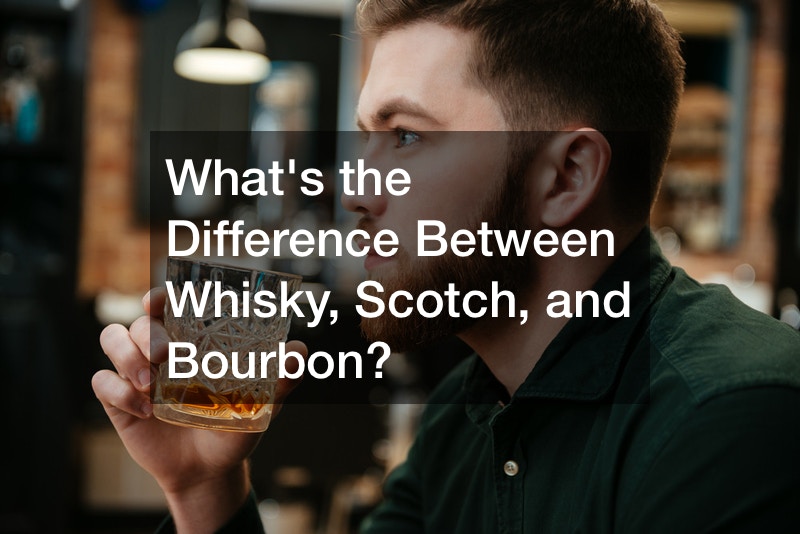 Ever wonder what the exact difference between whiskey, scotch, and bourbon is? While these kinds of alcohol have similarities, they fall into different categories. The video from Flaviar provides a more visual explanation, but keep reading for the explicit details.

Whisk(e)y is any distilled alcoholic beverage made from fermented grain mash, which can be barley, rye, corn, or wheat. Whisk(e)y is actually the name of the alcohol style category that encompasses both bourbon and scotch. In other words, bourbons and scotches are different types of whiskey.

Wondering what’s up with the “e” that’s in some spellings and absent in others? That’s a modern spelling thing that refers to where the booze comes from. Typically, “whisky” comes from Scotland, Japan, or Canada, while “whiskey” comes from the United States and Ireland.

Location also plays a role in whether or not a whisk(e)y is scotch or bourbon. As of the Scotch Whisky Act of 1988, all spirits must be matured in oak aging barrels in Scotland for a minimum of three years in order to be labeled scotch. Scotch must also be distilled at an alcohol volume of less than 94.8%. Nothing can be added to it except water and plain caramel coloring.

Likewise, the Federal Standards for Distilled Spirits dictate that all bourbons come from the U.S. and enter the oak aging barrels at no higher than 125 proof, leaving at no higher than 80 proof. Nothing can be added except water (the color? It all comes from the time spent in barrels).

Whiskeys bottled by other countries that want these designations often source their ingredients or base spirits from Scotland and the U.S. in order to meet standards.

Sound good? Now you can order at the bar like a pro!.